The Journey in Words...

Words by Mark Bradley, photos by Paul Ellix and video by Mervyn Leslie. 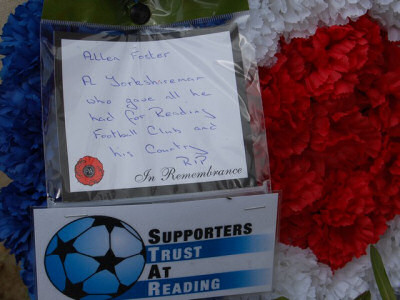 Over a weekend in June 2011, I was lucky enough to be part of a group of STAR members who travelled to The Somme. Inspired by a visit to Northern France made by manager Brian McDermott as well as former players Ady Williams, Mick Gooding and Trevor Senior, Reading’s supporters organised their own trip, keen to follow the path taken by some of the club’s former players during World War I.

Boarding the coach at Madejski Stadium at 6.30am, few fans knew what was in store. Two of my colleagues had taken in part of the trip when they visited the battlefields and resting places of some of Reading Football Club’s war heroes with the manager last year, and I had seen the footage they had filmed and immersed myself in the 22-page matchday programme feature we produced for the Remembrance Day issue back in November. But without experiencing the trip yourself, it is difficult to appreciate the true connection you start to form with these players when you learn what they went through during four years away from Elm Park in the early 20th century.

Hopping on and off the coach into a persistent French drizzle, we learned about Joe Dickenson – the first Reading player and one of the first professional footballers to arrive on the Western Front – and his brave battle at Festubert, before paying our respects to him at Le Touret cemetery. Ben Butler’s tale was made all the more poignant by the laying of a wreath at his grave by his great nephew Daryl Melhuish, who was part of the travelling STAR party.

Despite running behind time, the vote was unanimous when asked if we should try to squeeze another story into Day One – everyone wanted to know more and more about Reading Football Club’s war heroes and a trip to Delville Wood took us into the early evening. Personally, perhaps, it was the place that had the biggest impact on my trip. Try to picture the most tranquil garden surrounded by a calm, still, tall-treed wood, droplets of mid-afternoon rainwater dripping from the branches up high as the dusky sunlight forced its way through the branches. And yet, a very different picture was painted of that very same spot almost a century ago – so different that it was nicknamed ‘Devil’s Wood’ and described to us quite literally as ‘hell on Earth’. 20,000 men died in one day in that wood, 40,000 more were wounded. One of those men was Royals defender Ted Hanney. Shells fell every second during one of the bloodiest and chaotic battles ever fought. Unimaginable scenes.

The following morning we learned more about the end to Allen Foster’s war at Guillemont and the tragic end to his life at Corbie, and then an emotional Carol Buckell laid a wreath at the gravestone of her Wokingham-born gunner grandfather Heber Slatter, who was another Royals casualty of WWI. Carol had obviously never known her grandfather, so I think it came as a surprise even to her when she became so teary at visiting Corporal Heber Slatter’s resting place.

A lot is made of the need for supporters to be able to relate to the players they follow from the stands. Heber Slatter played football in a very different era, lived in a Reading very different to the town we live in today, and witnessed war scenes of the like most of us in this day and age can’t even begin to comprehend. But I think a sincere Reading Football Club connection came through in some of the press cuttings following the players’ deaths and the letters sent home from the front line, and that helped every one of us on the trip relate to every one of the players who fought for both club and country.

Our final stop on the tour took us to Beaumont-Hamel and some of the best-preserved examples of trench warfare in the world. Throughout two long but fascinating days, we had closely followed the incredible journeys taken by six former Reading players – and their stories had been told to us alongside the wheat fields where once they fought, in serene unpopulated wooded areas where once shell fire was one long continuous sound, in the tiny streets of French villages which were once so fiercely fought over, and from deserted but immaculately kept cemetaries where those who didn’t make it back to Elm Park now lie. But at Beaumont-Hamel, there was a visitors’ centre, a small museum exhibition, guides assigned to taking school groups of all ages through the horror of trench life. I went on a school trip to The Somme when a pupil at the Forest School (quite some time ago now!), but anyone who thinks that they have seen and heard it all with one flying visit to Beaumont-Hamel, should think again! By following these six individual stories in such depth, World War One became very personal to every loyal Royal on the trip.

Military historian Jon Cooksey, our guide on the tour, told us the final tale of Joe Bailey, a Royals legend who was honoured three times with the Military Cross for his exceptional bravery in battle. And then, with a ferry to catch and time disappointingly running out, we swiftly trundled five minutes down the road to pay one final tribute to the soldiers who died in World War One but who have no known grave. A list of 24 STAR members were checked onto the coach on Friday morning when the trip began – on Saturday afternoon those 24 humbled men and women stood in front of Thiepval Memorial in Picardie staring at almost 73,000 names inscribed on the stone walls of the monument.

The journey back to Calais was a quiet one. Yes, we were tired after two long days, yes we’d all grown a bit bored of the instant coffee on the coach, and yes after so much time on the road together we were all running out of things to say to one another. But largely the silence signified a group of people reflecting on what they had seen and heard during a memorbale trip to the Western Front.

NB. A huge thanks must go to military historian Jon Cooksey and BBC Radio Berkshire’s Graham McKechnie whose combined enthusiasm and energy helped make every story come to life and whose research made the trip what it was – informative, emotional and thoroughly engaging. They genuinely asked every trip-goer to have no qualms about contacting them if they had any more questions to ask or any further avenues of research for them to pursue – and it certainly got me wanting to know more about my familiy’s connection with WWI as well as the other Reading Football Club stories hidden in battlefield diaries. The fact that we all came away wanting to learn more is the biggest compliment that can be paid to Jon and Graham. Thank you both.