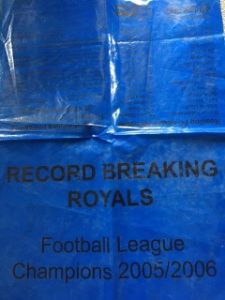 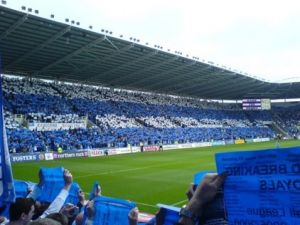 The last game of that historic 2005-06 season was against QPR so we thought it was possible to get the whole of the stadium raising the hoops before kick-off.   It took a great deal of counting seats then calculating the total number of blue and white sheets needed to get the correct effect, as well as the help of a lot of people to put the sheets on every one of 24,000 seats.

The result was worth it and, at least in the rehearsal, even the away stand (hoops too!) joined in.   The game that followed was the 2-1 win which took us to the record 106 points, thanks to Graeme Murty’s late and highly emotional penalty kick.

The ‘raise the hoops’ picture now stands large in the Reading boardroom as a permanent reminder but I’ve hung on to my own personal sheet.
This piece of memorabilia is from Paula Martin