My piece of Reading FC memorabilia – an Elm Park seat back 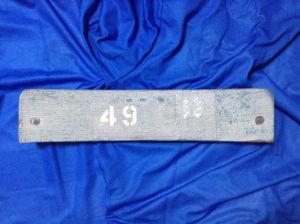 I was kindly given a backrest from a seat in the Norfolk Road Stand at Elm Park by a dear friend. Through the years it has changed with the times: from a brown varnish finish to various shades of blue. At one time it even had a vertical white stripe. Hiding in the layers are traces of its identity as a seat – the remains of a zero and finally ‘seat number 49’. Which row, we will never know. Not the prettiest of objects I must admit.

My grandfather, Ernest Lyddon Bennett, arrived in Reading from his birthplace Buckfastleigh, Devon, just after World War One. His wife Purl Bennett had sold the hotel she owned there and bought the Cabin Restaurant in Broad Street. They soon relocated the restaurant to Friar Street above a sweet shop which my grandfather ran.

On Saturdays in the 1920s, after he had shut his shop at midday, he would have his lunch and catch a tram down the Oxford Road in the direction of Elm Park to watch his adopted team, Reading Football Club. Ernest always sat in the Norfolk Road Stand to watch a game. When his daughter, Peggy Bennett, was old enough she would accompany her father to the ground and sit on his knee to watch the game. As she grew up she occupied the seat next to him. Together they supported their team, hoping in anticipation that the winning goal for the Biscuitmen would kiss the back of the net.

Both my mother and grandfather are no longer with us but I often look at the humble seat back, with all its layers of history and wonder –  did my mother or my grandfather ever rest their backs against it while supporting their – and my – favourite team?

This piece of memorabilia is from Pete Vickery