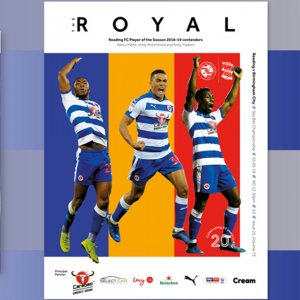 TODAY WE HERE FROM IAN MAYNARD – STAR BOARD CHAIRMAN

So over the season we said adios to Paul Clement and Ron Gourlay and welcomed Nigel Howe back, and also we welcomed a new manager, Jose Gomes. Writing this, before the final away game at Middlesbrough, we are more or less assured of staying up this season.

Over the last month it has been as gripping as Line of Duty or Game of Thrones, as the 1st team has been playing at a level they would expect, which is mirrored in the expectation of fans. Away from the scrabble for points, I continue to see promise for next season as new players have broken into the 1st team squad via the Academy.

I am looking forward to next season in which Reading FC will look to emulate Norwich, who ended up in a similar place to us in 2017/18 and should be promoted this season. It is always seen as a possible poisoned chalice getting into the Premier League but hopefully Reading FC will be in the shakeup this time next year.

This season has seen more emphasis and consideration of how football clubs are run financially. It is an area that some may say is long overdue for consideration and for the rules to be applied fairly and properly. This season has also seen pressure put on particular clubs (Blackpool springs to mind amongst others) by fans who don’t want to be seen as irrelevant and championed for proper action to ensure that those at the helm of football clubs, recognise the importance they have as part of the identity of the area, its history and traditions without being stuck in the past.

It is a difficult balance to maintain but is not impossible to achieve as long as fans always feel they are able to be heard and not taken for granted, whatever type of fan they may be.

It seems a long time to the beginning of next season and in the main for most football fans it will fly by and we will be checking the fixtures before we know it, especially as there will be Women’s and Men’s international football to get into.

Returning to a local level, I hope that we see Jordan Obita challenging for a place in the squad next season,.

Come on You RRs