It was great to see Club 1871 growing in numbers and noise on Saturday in practice for the big test last night when Leeds come to town. For a group dedicated simply to getting behind the team Club 1871 has raised a surprising number of questions.

From STAR’s point of view Club 1871 is good, necessary and brave taking on the challenge in one of the most difficult seasons for the club in recent memory. It’s easy, if you’re Palace or Huddersfield or Watford all enjoying unprecedented success, to go along and shout and wave a banner. Much harder when you often don’t score at home and all always lose when you concede first. At least that’s now changed!

It’s what supporters are for – to try and change the mood when everything is down. It’s what the URZ movement did with its theme days nearly 20 years ago when we struggling at the bottom of the third tier. Back then there were people who hated the Beard Band and the inflatables so we know you can’t please all fans at the same time.

There have been objections that the club are losing money by not selling the whole South Stand to away fans but away fans only fill it a few times a season anyway. In our view it’s great that the club don’t prioritise money over better backing for the team. And we do our bit for away fans with our £20 ticket prices that bring more in than would otherwise come for many games. Given the overall size of the debt the money foregone here is a couple of drops in the ocean and if the noise helps keep the team up in the Championship it will more than have paid for itself.

Years ago we supported unreserved seating as a way of enhancing the atmosphere and encouraging casual, younger, on the day support and it’s good to see that as part of the 1871 experience – making the home match seem more like many away matches. Free beer never seems to fail as a tactic!

STAR ran a poll on Twitter that suggests nearly nine out of ten supporters approve of the Club 1871 initiative. It could get even better when we have a club near the top of the table. Right now we have to concentrate on ESCAPE with only five home games to go. Urzz! 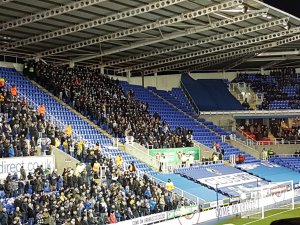