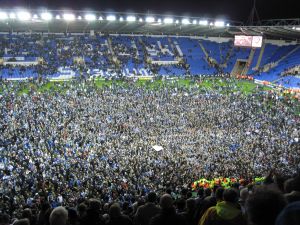 You may be wondering what’s happened to the government’s sponsored Fan Led Review (FLR) into the governance of football. The Crouch Report was published in November 2021 and a White Paper showing how its recommendations might progress into law has been promised ever since without yet appearing. You may also have been perturbed by reports in one or two national newspapers that the Review was going to be kicked into the long grass.

Well, we can’t bring you definitive good news, but we can tell you that the campaign to implement the Crouch Report in full is alive, well and kicking – and that STAR is fully behind it. We are still pushing Reading FC for a high-level meeting on enacting some of the Report’s key recommendations. Due to unavailability of key people at their end it hasn’t yet happened. In the meantime, here’s what’s going on:

– Of all the candidates for the Tory party leadership Liz Truss was the least supportive of the FLR and Rishi Sunak probably the most supportive. So, the last couple of weeks have been helpful there!
– The FSA said in September, “We have secured the support of government for all of the report’s strategic recommendations. We have had explicit commitments of support for an independent statutory regulator from the previous prime minister (Johnson), secretary of state at the DCMS, and sports minister establishing all that as official government policy, and the DCMS staff are continuing to work – with regular input from the FSA team – on the White Paper due to be published this autumn … the FLR has cross party support, with the Labour Party currently saying that their manifesto for the next general election will contain a commitment to “the implementation in full of the Crouch Report”.
– The Football Supporters Association (FSA) continues to campaign, lobby MPs and discuss with the Dept of Culture, Media and Sport who are preparing the White Paper. As everyone knows, there have been huge distractions in politics in the last few weeks.
– The English Football League (EFL) are fully behind the Report but the Premier League are not and continue to propose unsatisfactory ‘half-way house’ measures like a Fan Engagement Standard.
– At a few EFL clubs great progress has already been made in voluntarily implementing some the Crouch Report recommendations. For instance, there is now a Shadow Board (of supporters) at Cambridge United and at MK Dons.
– Nationally, the next step is a day of action on 15 November – close to the anniversary of the Report’s publication – to make the points that (1) we’re still waiting (2) if there had been an independent regulator in place, it could have prevented or dealt with situations, such as Derby County; promises from the football authorities that they have failed to deliver on (a financial settlement between the PL and the EFL, the PL’s “owners’ charter”, the PL’s fan engagement standard, to name but three), and other opportunities missed (like the money that could have been generated for grassroots football from a 10% transfer levy – £170 million from the last transfer window alone).
– Locally, supporters can help by writing to Reading FC – dpang@readingfc.co.uk and mbradley@readingfc.co.uk and backing STAR and the Report and / or by emailing our local MPs, in the next two weeks, asking for the full implementation of the Crouch Report. So far, the only local MP to come out in public support is Laura Farris (Newbury). Please contact only your local MP:
o Reading East – matt.rodda.mp@parliament.uk
o Reading West – alok.sharma.mp@parliament.uk
o Basingstoke – maria.miller.mp@parliament.uk
o Newbury – laura.farris.mp@parliament.uk
o Wokingham – john.redwood.mp@parliament.uk
o Bracknell – james.sunderland.mp@parliament.uk
o Henley – howelljm@parliament.uk (John Howell)
o Windsor – adam.afriyie.mp@parliament.uk
o Or for anywhere else, search at https://members.parliament.uk/members/Commons

In summary, implementing the Fan Led Review is still by far and away the most important matter facing the supporters’ movement nationally – and it will have big and positive effects in every locality. So, STAR will be keeping you in touch throughout the season. To keep it in mind we’re using this email signature (below) when writing to stakeholders during this season.