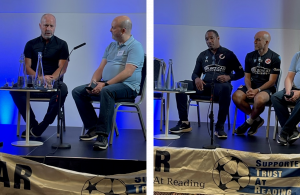 A personal take on last night’s (11 August 2022) Fans Forum with Paul Ince, Alex Rae and Mark Bowen in the Princess Suite, SCL Stadium, by Roger Titford. This is not intended as a full record.

I came away encouraged by the realism and openness expressed. As I see it, we’ve moved away from this Continental / Project type strategy with Italian directors of football and teenage loanee Portuguese fullbacks to something much more grounded and appropriate to where we are now as a club. The complaints that fans (including STAR) and former players were making back in January have been heeded. The strategy has changed, the corner has been turned.

Paul Ince talked of “a soft malaise” that had spread through the club and of a lack of strategy and structure particularly in the key area of player recruitment. He and Alex Rae said “we didn’t know what we were going to get when we turned up but the core group bought into what we’re trying to do.” The Birmingham and Bournemouth matches were evidence of that and gave something to build on to save us from the drop.

Over the summer Mark Bowen and Brian Carey came in, and together with Paul, they head the recruitment effort. Now there is an internal scouting resource – video analysis based, as very few clubs now have a physical network of scouts they send out. Recruitment is far less agent-driven. The club have to work with unprecedented regulation by the EFL – it’s not just about individual wages but the whole squad average. We can’t pay transfer fees, loan fees or compensation fees.

Overall the trio want a stronger and more powerful team. They want Academy lads to go out on loan and experience “proper football” but that is constrained by the need to cover for injuries. Eddie Niedzwicki has come back to the club in a role of individual player coaching development and that should be well received by PL clubs considering loaning us young talent.

With the restrictions this season isn’t going to be easy, but the aim is to be competitive in every game, to create a siege mentality to get us through this season of embargo and then, having stabilised the club, build for a more progressive future.

As always, the role of fans is crucial. We have to be united and understanding. The recent lack of connection and communication between club and fans has been acknowledged. A key part of Mark Bowen’s role is to be that link, with genuine football authority, between the ownership and the fans. He speaks to Dai Yongge one to three times a week (through interpreters). This Fans Forum, which Paul and Mark enthusiastically embraced, is one aspect of that reconnection. Another is players going out into the community this season, visiting hospitals, presenting prizes and so on. When it was pointed out that the fans as No 13 had been dropped from the club’s squad list Mark said he’d get that reinstated.

As for the first team squad now, there are still two or three places to fill, possibly a left back and midfielder. Naby Sarr has signed but has taken us over one of the EFL limits so someone has to go before he can be played. Paul insisted that the core of the team from last season be kept and is satisfied that that has happened. Injuries are a huge concern but Paul hopes that four or five will be back in a couple of weeks. Liam Moore’s injury was career-threatening but he is now hoping to be available by December. Many of the injuries we suffer are recurrences of old injuries but a lot of work is being done on the preventative side – yoga and stretching sessions and more work on weights. At the moment our opponents can put on four or five like-for-like subs in terms of quality and we can’t match that until we get more players in or off the treatment table.

My take is that in the last six months things have just got real on the playing side. After the 0-4 at Forest Paul spelled out the consequences of relegation for everyone working at the club. Dai Yongge and the people around him have realised the need for strategic change. He’s still going to remain very private but he still has the desire to invest and grow the club – this time in the right way. When we didn’t have a proper recruitment process agents would bring him players and he might be tempted. Now we have our own people telling agents what type of player we want – and how little we can afford!

An audience member asked Mark if he (Mark) could put out a strategy statement, summing the changes that had been made and direction of the club now he’d described for a wider audience and I think he nodded to that! If not, I hope these words are a useful substitute.