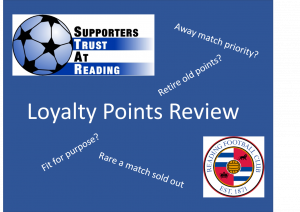 STAR last reviewed this in 2014 and achieved an uprating of points awarded for attending away matches. Over the past couple of years concerns have been raised by some supporters that new or younger supporters are disadvantaged by the scheme which works in favour of longer-standing supporters with higher points balances.

The purpose of this meeting was to learn about what the actual pressures were and how flexible the system was if changes were desirable.

The club said that nowadays it was extremely rare that a match was sold out before reaching ‘general sale to member card holders (MCH)’. The away match at Luton in May 2022 was the only recent example recalled.

Club and STAR agreed that giving current season ticket holders (STH) priority was still the right policy and within the STH base then giving priority on a points basis. This does have the effect of relegating member card holders with large points totals below current STH – but the instances where such fans can’t buy are currently very rare. This policy also gives new / younger supporters buying a STH a chance to put themselves higher in the ranking than a supporter who has a large points total but no longer attends matches regularly.

STAR asked if away match attendance only could be used as a priority for buying high demand away match tickets. The ticketing system does not allow for this to be done automatically. Club stressed that, in order to add Loyalty Points to your account, supporters have to buy their away match tickets through RFC Ticket Office.

STAR asked if supporters with a high points balance could buy their ticket and reserve the seat next to them for a family / friend whose points balance would qualify them to buy later in the week. Unfortunately, the system cannot accommodate this without significant manual intervention by the ticket office. The best advice was that if the family member was in the immediate points range below the buyer, then the buyer should contact the ticket office late in their priority day and see if anything could be done.

Cancelling loyalty points that were gained long ago (pre-2011, for instance) would be possible but, of course, contentious. PC advised STAR to look at the Brighton &HA points scheme as an example of a very different approach but one that RFC would not currently endorse. One of its features was giving supporters bonus points for renewing for consecutive seasons.

Club said the loyalty points scheme was useful in preventing away fans from buying tickets in home supporter areas of the SCL.

The overall out-take, however, is that the loyalty scheme is fit for purpose in our current circumstances and that very few fans fail to get a match ticket they want. The public perception of scarcity of high demand tickets does not match the reality. However, it makes sense to be prepared for a successful team creating problems in the future so suggestions such as using the previous season’s away record should be investigated along with other ideas from other clubs.

In terms of a new, loyal Reading supporter it would take them two seasons as a STH and STAR member, and going to about half the away matches to amass about 500 loyalty points at which point they have some priority value – and of course priority over all non STH members with however many points.