My Piece of Reading Memorabilia – a very loud rattle 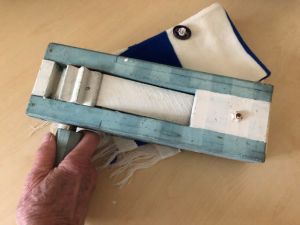 I lived in Reading from 1961 to the beginning of 1965 and attended all the home and most of the away games. Something I never went to a match without was my wooden rattle. I purchased it from an Army Surplus store in the Strand in London and painted it in club colours. It is extremely noisy as the back has a metal plate. Apparently it had been used in the Army to simulate machine gun fire!  It was heavy to carry and needed a certain momentum to use. I gave it a good twirl as the team came out or had a near miss at goal.

One of my recollections is the League Cup game on 14 October, 1964 away to Fulham, who were then in the First Division (now the Premier League), and who had a number of England players (Bobby Robson, George Cohen) in their team. Against all odds, Third Division Reading had drawn 1-1 at Elm Park and won the replay at Craven Cottage 3-1. I waved my rattle so much that my fingers blistered and the blisters broke open. My hand was quite a mess.

I keep the rattle as a souvenir. The only time I used it since was to celebrate in the garden when England won the World Cup in 1966. I wouldn’t use it now, it would probably disturb the neighbours too much. (Editor’s note: you wouldn’t be allowed in the stadium with it. STAR has a similar rattle, also re-purposed from World War II. We needed special dispensation to take it in for one match only. Nearby supporters were most put out by the noise when we used it.)

This piece of memorabilia is from Colin Vibert – The Jersey Royal