My piece of Reading FC memorabilia – 18 player cards from 1994 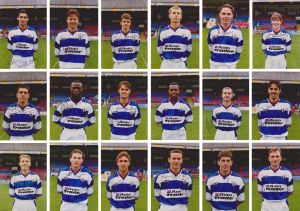 I started following Reading at the age of 10 or 11, even though “following” meant at that time buying a German football magazine where I could see the league table. The reason for my interest in the club was due to the twin town relationship of Reading with my hometown of Düsseldorf and the fact that I always liked the special atmosphere in British football stadiums. Later my parents found out that I could get the magazines like “Shoot” and “Match” at the Düsseldorf Train Station. Now I knew at least that Hopkins, Parkinson, Lovell or Holsgrove were among the players who wore the blue and white shirt.

And after my first year of learning English at school (aged 12) I gathered all my courage and wrote a letter to the club, with the very precise address: “To FC Reading”- no street, no town, no county, no postcode! But some weeks later I was probably the happiest boy around Düsseldorf when centre forward Uwe Hartenberger answered. I didn’t even know that a German was playing for Reading! He sent me a poster and 18 player cards. I think these are the kind of moments that you will never forget in your life.

For the first time I could put a face to the names. I took these photos everywhere I went. It didn’t matter if I went to school, to meet a friend or to spend some holidays on the beach. These 18 player cards were always with me. Innumerable times I showed them to my parents followed by testing them, “Who is this? Who is that?” When I look at them nowadays all great memories of the initial years of supporting Reading (my first visit to Reading, the first match at Elm Park etc) come back immediately. They meant everything to me in my youth and still do even today. I’m very thankful for all that and the special memorabilia sent by Uwe!

This piece of memorabilia is from Marco Bader

(Editor’s note: well done Uwe and the club. This kind of response to fan requests really can work. I have a friend who received a similarly positive reply from Burnley in about 1965 and still follows them to this day.)