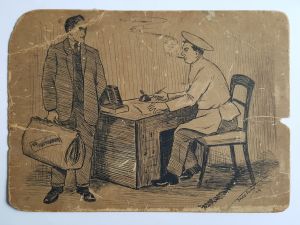 I’m a keen collector of old Reading FC stuff and have managed to get some nice things over the years. Several years ago I created a website called ‘The Biscuitmen’ (which at the moment is offline) and through it a lady contacted me and kindly sent me this original drawing.

As is so often the case, Reading were struggling financially and were forced to sell their prized asset Fred Wilkes for a then significant fee of £350. This sketch depicts the defender’s departure to Spurs in February 1909. It was drawn by the artist Fred Ford for inclusion in the ‘Reading Observer’ and appeared in the newspaper on 6 March1909, with the following text: ‘Biscuiteer: “You’ve done us fine service, Wilkes, and we are very sorry you are going, but it HAD to be! Good luck to you at Tottenham!”

As early as the 1890s Reading were known as the Biscuit Boys or Biscuiteers and the club was usually represented in cartoon form by a man wearing baker’s attire, right into the 1970s, though by then he’d given up smoking at work!

Wilkes later returned to Elm Park, becoming the team’s trainer during the club’s early Football League days before leaving to take up the stewardship of the town’s Curzon Club on the Oxford Road.

This piece of memorabilia is from  Chris Lee