My piece of Reading FC memorabilia – a framed tribute to Marcus 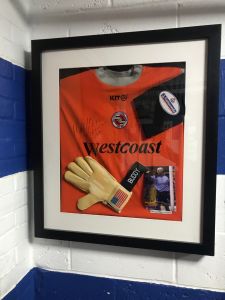 With the exception of a two-team-scarf from the FA Cup replay at Anfield in 2010 (Liverpool always were my team that might win something and Reading my home team), various books, DVDs and the odd programme), I am not allowed my Reading memorabilia in the house…  so they’re in the garage/Man Cave instead. First, you’ll notice how the walls are painted!

Here’s my tribute to our wonderful mad American ‘keeper.  It just needs a souped-up Porsche (well, I have a stock one outside) and guns (😳) to cover all the bases associated with him.

The glove I caught when he slung it into the crowd as he came off after his last game at the MadStad and the signed shirt I picked up on eBay for just 99p unbelievably with an opening bid. It cost a lot more in postage but the fellow must have been desperate to sell.

I never met Marcus but always had a soft spot for him as he was a charismatic contributor to the most enjoyable period in the 50+ years since I first watched Reading play. Amazingly he went a whole 12 months without letting a goal in at the North Stand (now Eamonn Dolan Stand) end in 2005 to 2006.

This piece of memorabilia is from Colin Ford