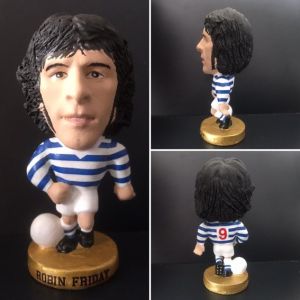 Hey, I hope you don’t mind me joining in. I’m writing to you from Brazil. I don’t support Reading FC, in fact, but I am a great football fan. I visited the UK in the past – as a tourist in 2014 – however I’ve never even been to your town! Next time, I will certainly make a stop there to have a good chat with the Reading supporters and to watch a match at your stadium.

I am a painter and collector of football figurines. Corinthian Prostars was a popular brand of football figurines from the UK. They produced a lot of models but unfortunately some classical players they forgot to make. So, I often try to create some former players, using other figurine bodies, changing the faces and repainting the jerseys.

I discovered Robin Friday by listening to a Brazilian podcast about “the mavericks of football” that a friend of mine – Rafael Reis, also a figurine painter – showed me. I got really fascinated about this player, regarded by many as the greatest to ever play for Reading. As a fan of Robin Friday, I wanted to create and paint a figure of him, so I contacted STAR for some information about the shirt because I wasn’t quite sure if he wore number 9 or 11 during his time at Reading. But thankfully STAR gave me the information I was looking for and I could make this classical player.

You can see my version of Robin Friday, Reading FC 1974-77, at www.instagram.com/p/CMQAFfRHop0/

His face was very peculiar, so I tried to create an allusive figure. On Insta you can circle right around the figurine and see him from eight different angles. At the moment I am writing to you, Robin needs just another eight likes to overtake the likes for Diego Maradona figurine on my Insta!

I believe the spirit of Friday still lives on and I am very happy to honour his memory.

Hope you enjoy it!

Editor writes: Thanks, Mark – it’s great to see Robin up there on your site alongside Maradona, Gullit and Di Stefano. His legend clearly won’t die – Robin was also a double page feature spread in L’Equipe, the top French sports newspaper, on 30 December 2020, in a series on ‘les autres Best’.