My Piece of Reading FC Memorabilia – Crowdfunding the old way

Crowdfunding might seem like a very modern thing, but back in 1957 the old Supporters’ Club was at it in a very basic way. This excerpt from an April 1957 match programme reads, “we would like to thank you for the way you are supporting our Sheet collections and also we would like to thank the men who go round with the sheet, this effort is bringing us in regular income and Wednesday Night’s Collection was £5 0s 2 ½d and this will purchase a Ton of cement which will be used for Ground improvements behind the Tilehurst Goal.”

Four men walked around the perimeter of the pitch each holding a corner of a sheet and fans chucked, hurled and tossed their loose change onto it.  Every halfpenny was counted and a ton of cement was soon forthcoming. In the picture below, you’ll see the players (!) setting to work on building the Tilehurst End, cement mixer over by the turnstiles. We got 41 years of life out of that terrace improvement. 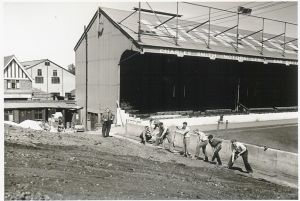 John Watts, on behalf of his late brother Peter, recently donated to STAR a large collection of programmes going back to the 1950s and in the pages of these you do find odd little gems about the game long ago.  How it’s changed! Thank you, John and Peter, for this piece of memorabilia.

This piece of memorabilia is from  John Watts