Whilst we’re all missing live football at the stadium we thought we’d take a sideways look at the Reading memorabilia some of us have collected down the years of following the team. So over the next few months we’ll be featuring here on the STAR Facebook page a unique or unusual object with a personal meaning for the supporter-owner.

We have a few stories lined up already but we’d love to have more. Perhaps we could get enough for ‘a fans’ history of Reading FC in 106 objects’?

If you’ve got a story to tell about a favourite piece of memorabilia please get in touch with media@star-reading.org . All you need provide is your own photo of the object (for copyright reasons) and 200-400 words telling us the story and a name (not necessarily your real one!).

Here’s the first story from Kevin Lenton about a unique evening at Elm Park just as it closed. 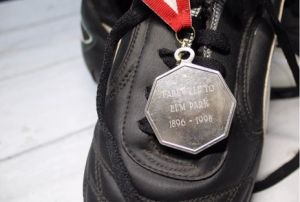 The 3rd May 1998 was a very sad day for Reading fans who watched a lacklustre home display, losing 0-1 to Norwich City at Elm Park. Sadder still, was that this was the last league game ever to be played at Elm Park, and we had finished bottom of Division One. The final whistle saw a subdued end to 102 years of history at Elm Park.

A few days later I had a much better experience by playing in an over-40s six a side tournament at Elm Park. I was working for ICL at the time and we entered a team that was OK but we did not win the event. I was fairly fit through playing six a side on the courts at Palmer Park but had not played on grass for many years, so I had to buy a pair of boots. That night I laced up said boots in a makeshift changing room in one of the hospitality boxes in the North Stand and then entered my field of dreams. Those boots were never worn again. Later I put them in a box, still with Elm Park grass on them and only today have they seen the light of day.

The most memorable moment was the game against a team with players having a link with Reading Football Club which included Johnny Brooks, the first Reading-born player to be capped by England. He only played 49 times for Reading before being sold to Tottenham Hotspur, where he developed into a great player and made his England debut in 1956.

In the six a side game against his side I saw he still had a great touch and always seemed to be in the right place at the right time. He was 66 years of age! So it was a real honour to shake his hand at the end of the game.

We did not win the tournament or even come runners-up, but one of my team mates was given a medal for scoring the best, or even the last, goal. Anyhow, knowing what Reading Football Club meant to me, he gave me his medal. This cheap and insignificant item is my piece of memorabilia.

This piece of memorabilia is from Kevin Lenton – STAR Board member