My piece of Reading FC memorabilia – My First Shoulder Flag 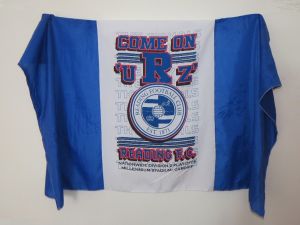 It’s the Nationwide Second Division play-off final. Reading against Walsall. If we had won, we would have reached the dizzy heights of League Division One (2nd tier). Just what the MadStad needed.

I was 14 and it was not just my first trip to Wales, if that wasn’t exciting enough, it was my first trip to a big final. Pure excitement. Dad had been asked by the company he worked for to arrange a staff trip to watch the game. So, on the day we left Bracknell early in the morning. All my fingers were tightly crossed. If I had had a lucky charm, it would have been safe and deep in my pocket. On the way there we had a coach quiz for a real cup. At great expense an old blue and white Willow Pattern tea cup had been nailed to a block of wood and the cup’s name proudly embellished on to the base in black Dymo Tape. It looked a picture!

I wore my Reading shirt and scarf, but needed that little something extra. Dad bought me a shoulder flag for the occasion. With URZ spelled right. Something to remember the hopefully triumphant day by. I was set up. Proud to call myself a Reading supporter.

It was a great day out. Shame about the result!

To this very day I still wonder if that result would have been different if we had travelled on Colin’s STAR coaches instead. Would we have won?

This piece of memorabilia is from Inga Vickery