My piece of Reading FC memorabilia – the first and the last?

Home News My piece of Reading FC memorabilia – the first and the last? 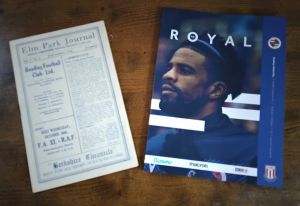 Despite being a lifetime Reading Football Club supporter I have never been a great programme collector. I was, however, pleased to pick up at a sale a few years back a copy of the first issue of the Elm Park Journal. This was then the title of the official programme of the club.

Volume 1 Number 1 first saw the light of day on 26 October 1946. Our opposition was Exeter City, and according to the neat handwritten entry on the back, Reading won 4 – 0. It had clearly been a good few weeks for the Elm Park faithful, because in the previous month Reading recorded home wins of 10 – 2 and 7 – 2 against Crystal Palace and Southend United. How times have changed!

Nearly 74 years later, at the start of the COVID lockdown in March 2020, Volume 74, Number 23 rolled off the press. We were to play Stoke City which was scheduled for 14 March. This game, as we now know, was postponed. Eventually, firstly the football returned, then the crowds, but our match day programme did not. This apparently, like the football rattle, half-time manually operated scoreboards and footballers who had to find summer employment to make ends meet, had become a thing of the past. I had also had to have a copy of this programme.

The fact that Exeter City were the opposition for that first programme pleases me. I spent my University years in Exeter and with a couple of pals often watched the Grecians toiling on a Saturday afternoon. Back in those days, and again in recent times, Exeter City always had a good home record.
If only we could say the same.

This piece of memorabilia is from Andrew Stone