My piece of Reading memorabilia – an over-inflated supporter

Home News My piece of Reading memorabilia – an over-inflated supporter 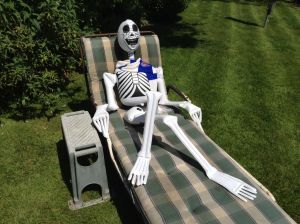 Hello. Do you remember me? I could have become a national hero. Well, not quite a national hero, maybe more like a Madejski Stadium Super Royals Treasure. I’m Kevin, Kevin Skeleton, AKA Bones.

I first became aware of Reading Football Club when I arrived at Birmingham’s St. Andrews Stadium for the last game of the 2011-12 promotion season. It was a Saturday. The 24th April to be precise. I hadn’t heard of football before that day, let alone the Royals. On the day I travelled there, deep in someone’s dank, dark pocket. Not a pleasant experience. Why? Because I did not have a ticket. You can say I was smuggled into the ground. Life up to that point had become rather flat and deflated. But that didn’t last long. With a few lungsful of air, someone breathed new life into me bones. I was soon crowd surfing over the moshpit of noise. In fact, I was flying high over the away end. If this was football, I’m having some of this, I thought.

That day I made new friends. All had a passion and their passion soon rubbed off on me. What was that passion? Well, it came in blue and white hoops, but on the day, I felt a bit let down as they played in red. There again, there’s always another day to see those blue and white hoops.

What was the score at the end of the game? To this very day I still can’t remember as my head was so full of hot air which made me feel as though I had nothing between my ears. I can tell you that we were the Championship Champions and that’s all that counted. I’m now proud to call myself a Royal.

For that reason, I’m putting myself forward as a piece of memorabilia. It reminds me of a brilliant day, in fact, a brilliant season. Plus, I had my moment of fame by appearing in the Summer 2012 issue of Reading Matter, in the ‘Highlights of the Season’ section. Me, a highlight? Grave mistake, surely! G’arn URZ.

This piece of memorabilia is from Kevin Skeleton!