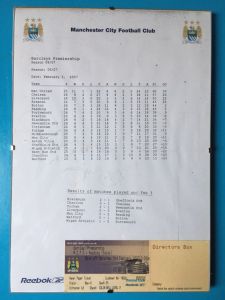 Back in 2007 Manchester City were a client of my business and so my partner and I were invited to watch their game against Reading from the Directors’ Box. We were going very well in the Premier League with five wins and a draw from the last six, still in with a shout of a Champions League place! City, under Stuart Pearce, were struggling to score at home, let alone win. The game went to form with Reading dominating and Leroy Lita netting twice late on for a deserved 2-0 away win.

The City people in the Directors’ Box took it on the chin and after the game a typed sheet was circulated with the day’s results and the updated league table. Reading were now sixth, sandwiched between Bolton and Portsmouth (whatever happened to them?). City were 14th but looked safe-ish from relegation.

Manager Steve Coppell came into the hospitality lounge, was delighted to share the success (against one of his old clubs) with a couple of Reading fans and signed my results’ sheet. His autograph is now sadly much faded but I know it’s there in the middle, even if you can’t quite see it. At half past five that afternoon I thought, as a Reading fan, it’s not going to get much better than this. It didn’t. But at least I’ve got a unique memory of the day.

This piece of memorabilia is from Roger Titford