Reading FC Deaf do the Treble !

The historians will recall that on Saturday, 18th May 2019 Manchester City achieved the treble. The headlines will proclaim ‘THE BEST PREMIER TEAM EVER’. Here at Reading our deaf team achieved exactly the same but in the England Deaf Football leagues. Unfortunately the headlines will not read ‘READING FC DEAF DO THE TREBLE’. In EDF terms they have equalled that of Manchester City. They had already become the EDF Southern League Champions, won the Southern League Cup and were after the EDF League Champions Cup.

The day dawned grey with a slight chill in the air. Passing showers had been predicted. This did not dampen our team’s enthusiasm. Ahead was a long journey to Calverton Miners Welfare FC’s ground where the final was to take place. Our players settled back into the team coach’s seats anticipating what the next hours to the final whistle would bring. Ahead lay a 3 hour journey. Plenty of time to sharpen the mind on the job in hand.

On arrival the team looked at the pitch. It was rock hard, the grass was on the long side of short and the surface was rough. It was not quite Wembley! Not a good start for a team who were used to playing on modern 3G pitches. ‘A slight change of tactics’, thought Craig Peters, the team manager, while he inspected the pitch. A little more route one football than normal could be the order of the day.

After warming up the team’s emerged onto the pitch. The usual pleasantries were exchanged and both teams set themselves for the coming battle. The whistle blew. Reading’s orange and black kit stood out on the pitch against Farsey Celtic Deaf FC’s all blue kit. The ball flew in to the Farsley’s half of the pitch. A shot was attempted only to be saved by their keeper. A good start. The keeper launched the ball down the field. It fell at the feet of a Farsley player who drove through and from the inside the area slipped the ball past our keeper. Goal. 1-1. 1 minute and 30 seconds on the clock. Not a good start. Craig stepped nearer the pitch and instructions were bellowed out. Did our heads go down? No. This was the catalyst that was required. Reading took over dominance and on half time walked in with the score still at 1-0. “The glass is not half empty” bellowed the gaffer. “It’s only had a sip taken out of it” he continued. “The cup is ours”‘ he encouraged reassuringly.

With Craig’s words echoing in their heads the team re-emerged back on to the field ready to continue the battle. The whistle blew. Away the team flew. A shot on target was saved by their keeper. Another flew just wide. We were dominant but their defence was solid. There must be a way through them? ‘The next goal was critical’ thought Craig with all his fingers and toes crossed. More words of encouragement came from the dug-out area. The minutes on the clock ticked by. On the 84 minute Mark Collard was driving the ball hard down the wing. He had nearly reached the 18 yard box when a tackle hit him hard. He hit the dirt with a thump. The ref’s whistle blew. ‘Free kick just outside the area” he announced. The wall formed. It was tall. It was massive. ‘Do I put the ball over the top or around?’ thought Tom Collard. He stepped back and on the referee’s whistle launched a hard perfectly placed shot over the top of the jumping wall. It flew through the defence and passed the stranded keeper. The ball hit the net, GOAL. 1-1. An equaliser. 84 minutes. Legs were tired. Cramps were beginning to show. Could it end with extra time and penalties? The fourth official raised his board. It read 3 minutes added on time. Reading came to life. “One last hard push” came the instructions from the dug-out area. Super striker Reece McLelland intercepted the ball and once more flew off down the wing. He cut inside and in to the box. Wave after wave of tackles came flying in. At one time he thought he had lost it. No the ball was still at his feet. The defence opened up and with the last ounce of energy he drove his laces through the ball. It flew pass the keeper and with a reassuring crunch hit the back of the net. GOAL. 1-2. Was this the winner?

2 minutes left. On the restart Farsley launched the ball down field and thundered off in hot pursuit. Our defence stood solid. Seconds turned into hours. Had the referee forgotten there was only 2 minutes left on the clock? The final whistle blew. It couldn’t be taken away. The Treble was Reading’s. 2019 READING FC DEAF would be the name on the trophy. Not only had Reading won the cup but Reading’s Super Striker Reece McLellan wad been awarded the Man of the Match Award. What a day!

Here at STAR we would like to say on behalf of all Reading Supporters, congratulations and once again we are very proud to be sponsoring Reading FC Deaf along with Total Communication and Reading FC Community Trust.

The BOBi League and the Southern Disability League Cup are still to go. No, the season is still not over. Make a note in your diary that on Saturday 22nd June, Rectory Park Stadiun, Ruislip Road, Northolt, UB5 6AU are playing in the final of the Southern Disability Cup. Come and cheer the team on for what could be there 7th trophy this season. As Reading FC Deaf will be playing again in the away 2017-18 away kit  – time to give your’s an airing. We will keep you informed about kick off times, etc. 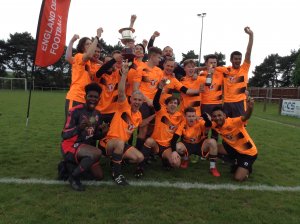