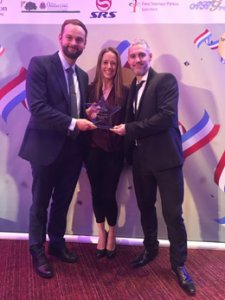 STAR sponsored Reading FC Deaf Team were awarded with The Mayor of Reading Team Award at the Reading Sports Personality Awards held at the Hilton Hotel on Sunday 25th March. The award was presented by The Mayor of Reading, Councillor Rose Williams, and represents a great finish to another successful season

Pete Vickery, who acts as liaison between STAR and the Teams, represented STAR at the evening award dinner.

Ahead of the presentation the team had a good weekend of football, winning all their three games in round four of the BOBi League. This raises them to second place in the league. They were also playing in Bristol in the second round of the FA People’s Cup, which they also won taking them through to the final in April at St. Georges Park.