Response to away fan issues on Saturday

Home News Response to away fan issues on Saturday 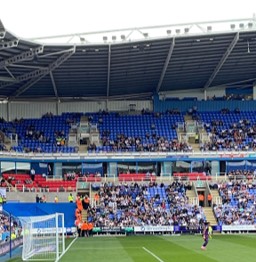 Following the problems at the QPR game on Saturday STAR have met with the RFC Safety Officer and Ticket Office Manager to discuss how and why the problems occurred and what lessons have been learned.

QPR only asked for 1500 tickets initially so misjudged demand drastically and put tickets on general sale rather than prioritising season ticket holders.  These were sold out in 3 hours.

The Reading website gave instructions of how to get a member’s card and book a ticket during the week before game.

There was an attempt to identify away fans by postcode and/or lack of loyalty points.  Facebook profiles also identified away fans who then had their tickets cancelled (but there is a suspicion they then bought again through a relative).

It has been established that there were a lot of purchases before the second 500 tickets were requested (those in lower west next to away fans for instance) so the checks were not as rigorous as expected and made worse by being a relatively local club so RG, OX and SL postcodes could not be differentiated.

Once the problem of so many QPR fans in the lower west were causing a problem the seats netted in the away area (to help stop standing in front of fans who can’t stand) as well as the 4 QPR flags were freed and with the number of no shows there were sufficient spaces to allow these fans to be moved to the away end.  There were too many to manage them if they were just ejected.

Individual QPR fans elsewhere in the ground were less problematic but still occurred.

The throwing of coins and bottles (by both Reading and QPR fans) caused considerable problems as did fans from both sides attempting to cross the netting.

To improve the checking of online purchases for likely sell out games for away clubs, make purchase for seats in the ground around the away fans needing a minimum level of loyalty points.

Make sure visiting clubs are aware of the maximum allocation when initial allocation requested. For likely sell out away crowds actually send them all their allocation and suggest they sell to their season tickets holders first.  Clearly it is their decision how they do it.

Consider extending the segregation netting  in Club1871 to make the distance between them and away fans greater. This is to make it harder for them to launch coins and bottles over.  The away section is set at the 10% of stadium capacity so cannot be netted further.