SITUATION AT READING FC – SEPTEMBER 2021 – A VIEW FROM STAR 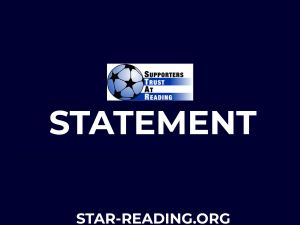 STAR recognises that our club, Reading FC, is in a period of great difficulty, and that our supporters would like some clarity as to what is happening both on and off the pitch. We are doing our best to engage with senior officials at the club and will report back as soon as we have done so. We had agreed a date, but this has since been pushed back to later in September, and in the meantime, here are STAR’s views on some of the main issues:

Immediate pressures on the club

What is our fundamental problem?

The owner’s intentions and vision

What can we hope for?

It’s a frustrating time to be a Reading fan, make no mistake. But as supporters, we should stick together and get behind the team. We saw this at Huddersfield with the travelling support on our coaches and beyond. Since returning from the pandemic, the support has been excellent despite results.

By the time the QPR game comes around, we will have a re-modelled team. Let’s give them every chance to succeed. In the meantime, as your supporters trust, we will continue to put pressure on the club to speak with Paula and Ben in the Structured Dialogue meeting and are actively encouraging them to confirm a date as early as possible, where we can put forward your questions and comments to senior officials.