Presented at the STAR AGM 5 September 2019

For the third season in the last four the club has struggled at the wrong end of the Championship table. By the of October 2018 the sense of the drift and unhappiness at the club was palpable and STAR issued an open letter “to those in charge of Reading FC” asking for “something dramatic or significant to happen”. We got our wish with the removal of the CEO Ron Gourlay and his replacement by Nigel Howe. A new manager was appointed in Jose Gomes, there was magic in the loan transfer market and a real effort made by the club to reconnect with the fans. Club 1871 is a manifestation of this and so too is the enhanced relationship with STAR which we continue to build on. The feeling around the place is now so different from 12 months ago. Optimism has returned. However I have to report on the 2018-19 season, a season of the proverbial two halves where, frankly, we did well to stand still.

Our membership number was virtually unchanged at 1161 (1166 – 2017-18) and our travel numbers slightly up at 2203 (1935 – 2017-18), largely due to another away tie at Old Trafford. The detailed financial figures are in the Treasurer’s report but the big picture is essentially unchanged here too. We have put more effort into social media and the Facebook and Twitter STAR account figures have shown steady increases.

Under the previous CEO there was something of a hiatus in our engagement with the football club and this continued for a while as the new regime found its feet. Nevertheless we engaged in two senior management meetings, a further meeting directly with each CEO, two Fan Engagement Panels, four Safety Advisory Groups, the Academy and the Community Trust.

As a consequence of the owner’s astonishing free away travel offer to STAR members we are already well-ahead of last season’s membership numbers. There will be an adverse impact on our travel revenue but it will probably be balanced by the increase in membership income and it certainly gives us a great chance to reach more Reading supporters with our activities.

We can now announce that, after several years of effort, that STAR has signed a formal Memorandum of Understanding with Reading FC to hold what’s called ‘Structured Dialogue’ meetings. Essentially this is the highest level of fan representation available, short of owning the club, and we look forward to these meetings on club strategic issues later in the season.

STAR will be running another remembrance trip in June 2020 to war graves, this time in Flanders. We will have a draw for a free season ticket which will be open to all members who have joined by the end of November 2019 so a nice Christmas present for someone. We will be announcing a new President for STAR this evening and there will be a new chairman for STAR later this month as I shall be stepping down at the end of my term of office. It’s been an eventful, challenging and enjoyable two years and I wish my successor the same – but with more joy on the pitch! URZ.

The STAR Board presently consists of the following members: 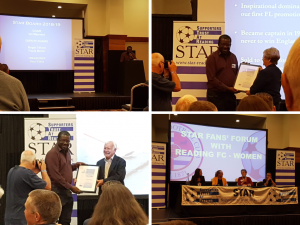