STAR and Reading FC sign up for Structured Dialogue

Club sign Memorandum of Understanding to commit to further fan communication
Royals promise to enhance already excellent lines of communications with STAR
——–
Reading Football Club and Supporters Trust At Reading (STAR) have signed a Memorandum of Understanding (MOU) document which enters the club and its supporters’ trust into a new ‘structured dialogue’ relationship.

The Government’s Expert Working Group on football governance recommended that “there should be a high level meeting on strategic matters twice a year between club senior management/owners and the official representatives of supporters.” With the signing of this MOU, we are now embracing that recommendation and will consult with STAR and representatives of our supporter groups on strategic matters and long-term projects at the club.

Reading Football Club have long included its supporters in issues at all levels of club operations, consulting fans, listening and learning from supporter feedback to improve the matchday experience and grow a strong affinity between club and fanbase.

Health and safety issues are openly discussed with STAR present at every SAG (Safety Advisory Group) meeting, operational topics are deliberated by club officials and supporters during regular Fan Engagement Group gatherings at Madejski Stadium, while the Trust are routinely invited into the Boardroom to take part in Senior Management Meetings at the club.

Roger Titford, Deputy Chair of STAR, said “This is being hailed as a positive and progressive move by both the club and the Trust and we’re delighted to have got this agreement over the line.

“It adds to the excellent representation supporters already have to the club through Fan Engagement Panels, the Safety Advisory Group and STAR’s access to senior management meetings. Very few other clubs in the EFL can boast this high level of engagement with their supporters and we commend the club for involving its fans at every level of a range of decision-making processes that take place within the business.”

Chief Executive Nigel Howe, “During my time as CEO, I have always welcomed open, transparent communication between the club and its fanbase. STAR continue to loyally represent supporters at a number of our meetings and I have been encouraged to see other supporter groups directly engage with the club recently.

“To improve the service we deliver to our fans, we have to listen and act upon advice from those who live and breathe all things Reading Football Club. So this Memorandum of Understanding it just another way to strengthen the bond between our club and the fan in the stands.”

If you want to understand how you can become more involved in representing supporters on panels who attend a range of open club meetings, contact the STAR Board directly to better establish how and where you can make a difference to the club you love. 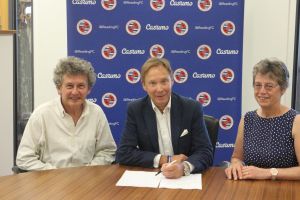