STAR’s Reading FC Hall of Fame closed its doors last night with addition of 26 new names. It brings the total since the Hall of fame opened in 2016 to 125 inductees. You can see this year’s inductees listed below.

Outside the SCL Stadium there was traffic gridlock caused by a partial closure of the M4 which affected the attendance and caused the late arrival of some honoured guests. In a sensational last minute finish Mark McGhee arrived just as the ceremony was closing, gave a powerful speech and was seen bear-hugging Sir John Madejski afterwards. It’s been nearly 30 years, time to move on and acknowledge the glory.

Even though he was one of Reading’s fastest forwards Nicky Forster (2000s) was so late that he met the organisers on the stairs as they were leaving! A quick about turn and we gave Nicky a quick look at his part of the show while Paula Martin (STAR Chair) presented his award. 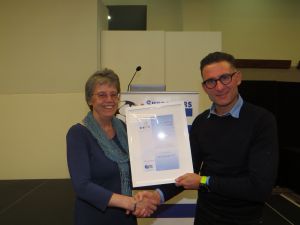 All the other awards were presented by the Mayor of Reading, Rachel Eden. The biggest cheer of the night was for the induction of 1970s legend Robin Friday – partly because there was a large posse of the Friday family in the audience, including his wife, daughter and niece. Robin’s twin brother, Tony, emotionally accepted award and said a few words. 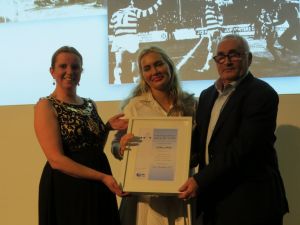 Lawrie Sanchez (1980s) reflected on how touched he was both by the award and the way in which the evening itself drew the strands of the club’s history and community together.  Dylan Kerr sent a long video message from South Africa, ending with him singing his own song – ‘Dylan Kerr, my lord, Dylan Kerr etc’! Les Chappell (1970s) came from Torquay to be with us and take his award with team-mates Gordon Cumming and Bobby Williams in the audience. Afterwards he confided that he used to have to give Robin Friday and Steve Death lifts to training and so was rarely on time – but he did make it in good time for the show.

Paul Allen and Roger Titford compered the show and it’s very likely to be the last until 2032 by which time the candidates for the 2020s will have burnished their credentials. The full list of the 2022 inductees:

You will soon be able to see full pen pictures of all these new inductees in the Hall of Fame section of our website – www.star-reading.org

We do have some brochures of the show available free of charge to pick up from STAR Base.