At the beginning of June over 40 supporters made a three day tour to visit the graves and commemorations of former Reading FC players who had given their lives whilst serving in the forces during the two World Wars. This was the third such tour arranged by STAR, with previous tours in 2011 and 2014. We have now visited the graves or commemorations of each of the 12 former “Biscuitmen” who we know lost their lives in France or Belgium.

Men such as Frank Ibbotson, who was conscripted in 1939 and served with the British Expeditionary Force; was left in France after the Dunkirk evacuation and escaped to England as one of the final troops to be evacuated from a port on the Bay of Biscay. Frank was sadly killed some four days after returning to France in July 1944 as part of the follow-up to the D-day invasion.

Norman Wood, Alex McCurdie and Walter Tull, all of whom appeared for the Biscuitmen whilst serving in the forces during World War 1 and who perished in fierce fighting.

Legendary striker Allen Foster and defender Heber Slatter, whose descendants accompanied us to visit the graves and pay respects to their ancestors.

The memorials we visited included the Thiepval Memorial to the Missing on the Somme Battlefield where, amongst the names of 72,000 soldiers with no known graves, 33 footballers are commemorated. At Contalmaison we saw the memorial to Donald Bell the only professional footballer to be awarded the Victoria Cross. As has been customary on our trips a wreath was laid at the Football League memorial to the 17th and 23rd Battalions of the Middlesex Regiment (The Footballers’ Battalions – shown right) in the village of Longueval just a long clearance from the where Norman Wood was killed, Allen Foster was fatally wounded and former centre half was Ted Hanney was injured by shrapnel.

A comprehensive account of the tour will follow in due course and we are planning a further Remembrance trip in 2020. An extensive and well-researched booklet on the trip has been produced and and is available from STAR Base. 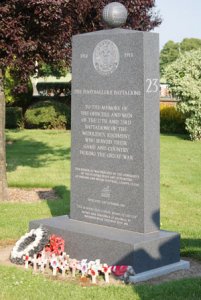