STAR once again sponsored the Reading & District Sunday Football League cup semi-finals and finals. Last night the senior cup, the Tilehurst Charity Cup was won by Tilehurst Club in a close encounter with Purley, at the Madejski Stadium.

Tilehurst took an early lead but were pegged back by Purley to give a 1-1 half time score. Purley had a lot of possession in the 2nd half but tired towards the end and Tilehurst took advantage with two further goals.

Congratulations to both teams for a good game and a special mention to referee Stuart Marsh, who despite being in his late 60s kept up very well with play. 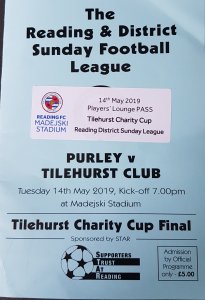