STAR Sponsored Reading FC Deaf are going for the Treble

On Saturday 2nd May Reading FC Deaf did the double by winning the EDF South League Cup with an emphatic 4-0 win against Brighton and Hove Albion’s Deaf Team. The game took place at the newly opened very impressive and modern Leatherhead Youth FC ground. The game initially went Brighton’s way, but they could not break through our impressive defence successfully.  After 20 minutes Tom Collard received a cross from his brother Mark on the left wing and neatly slotted the ball home. 1-0. This was followed on the 26th minute with our super striker Reece McLellan receiving the ball, driving it through the defence and pass the keeper. 2-0. On the half time whistle Brighton retired to their dressing room to lick their wounds and plan a new strategy. Dressing rooms at half time is not a Reading FC way. Debriefing and team talks by the dug-out are.

The second half kicked off and on the 51st minute left back Fayed Ahmed intercepted a ball in the Reading 18 yard box and took flight down the left wing. He rode several tackles, weaved around several more Brighton players and entered the Brighton 18 yard box to set up a one on one with their keeper. After a swerve to the left, followed by a jink to the right the back of the net bulged with a well rifled strike. 3-0. On the 63rd minute super-sub Rahul Pankhania, who had only been on the pitch a few minutes received the the ball and through a crowded defence slotted the ball home. 4-0. Game over. Time to sure-up the defence. Again not a Reading FC Deaf tactic. We continued on the offensive.

Now you might think that Brighton were not really in the game! Brighton had their chances, but these were stopped by our defence or saved by Josh Austin in between the sticks. On the final whistle the celebrations began. The Double was ours. Onwards for the treble was the battle cry.

So next Saturday, 18th May the Deaf Team will once again be in action. This time to see if they can win the treble. With 4 trophies this season already in the cabinet we are going for the fifth. Having won the EDF South League we are playing the EDF North League champions for the title of the National Champions. This takes place at the Calverton Miners’ Welfare FC Stadium, NG16 6NB against Farsley Celtic Deaf FC. Kick-off is at 2pm. We would love to see you there cheering us on.

Here at STAR we are proud to sponsor the Reading FC Deaf team and wish them the very best of luck. 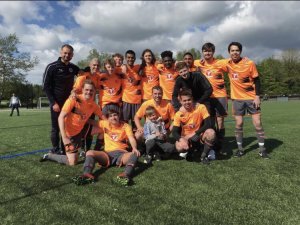