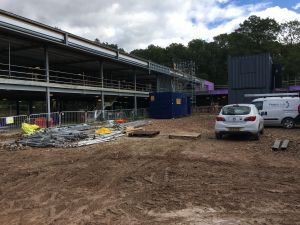 On a glorious October morning several members of the STAR Board enjoyed a tour of our new Academy base and training ground at Bearwood Park. It’s still very much under construction with the 1st team, Academy and club HQ buildings some time from completion.

But the crucial bits – the pitches and some changing rooms – are up and running. On 22 September our age group teams hosted Tottenham Hotspur competitively and the visitors were reportedly blown away by the quality of the site.

Elements of Bearwood’s past as a stately home and then golf course have been retained. There’s a 60 acre lake, a walled garden, 800 ‘protected’ trees and peaceful enclaves that were once fairways. Football-wise there’s a show pitch with a banked surround and undersoil heating, a UEFA standard floodlit 3G pitch and even a special training area for goalkeepers with softer ground so they don’t damage their hips too much! Eventually there will be eleven pitches.

Every detail has been considered: there will be overnight accommodation for players when arriving back late from away games, a swimming pool with turbine-charged water to assist recuperation and even separate paths to keep agents and scouts away from parents of our Academy players!

It’s an enormous investment but it’s necessary to keep our Category One Academy status which is the resource that gives our club its long-term strategic edge. STAR looks forward to many and great players coming from it.
This website uses cookies to improve your experience. We'll assume you're ok with this, but you can opt-out if you wish. Cookie settingsACCEPT
Privacy & Cookies Policy