STAR met the senior Reading FC executives for the second Structured Dialogue meeting of the season on 1st April. This is our chance on behalf of supporters to discuss some of the bigger issues and report back. You’ll find the report here: 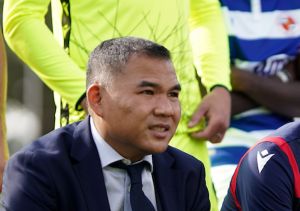 The club accounts for Y/E June 2020 have been filed with Companies House and should be publicly available by mid-April 2021. STAR will ask its financial expert to take a view and BS / RFC happy to answer his questions, as in previous years.

The overall picture is, not surprisingly, difficult with costs much the same but turnover down significantly (absence of fans from stadium).

The EFL will allow some adjustments on the Profit and Sustainability tests in the light of Covid but meeting them will nevertheless be challenging.

Increased TV revenue (with 17 matches to be covered by Sky) and steady i-Follow numbers have been mitigating factors. Moving to Bearwood has allowed some office space at the stadium to be let out. Eight first teamers will be out contract at the end of the season and negotiations are taking place with the possibility of reducing the wage bill further. The Casumo shirt sponsorship deal also ends this season. There is no news yet on a deal for next season.

The Hogwood training ground is owned by Dai Yongge so any future sale of this asset would not benefit the club. The Madejski Stadium has been sold beyond the football club group of companies. STAR queried why the Asset of Community Value (ACV) process did not kick in when this happened. RFC did not know and suggested STAR take it up with the Land Registry.

The club continues to hold a minority stake in RFC Prop Co which has the planning permission for the proposed Royal Elm Park development. It is not expected that anything in terms of physical development of the site will happen in the next 12 months.

The club’s overall strategy remains the same: to press for promotion to the Premier League as quickly but safely as possible, leveraging the Academy as a key strategic asset. There is a move to make decisions on Academy players a little earlier in their career development (more at 21). Instead of a Director of Football the club now has a Football Board comprising Dayong Pang, Bryan Stabler, Michael Gilkes and Veljko Paunovic.

The club is moving away from the EFL website and app template to a more bespoke, sophisticated and user-friendly design. Development is on track to public launch in June / July 2021 and STAR re-iterated its offer of members to act as guinea pigs to test the site ahead of launch.

Fans back in the stadium

Everyone is eager for fans to come back to the stadium and re-engage with the club but this process, and its timing, will very largely be Government-controlled.

Therefore, given the lack of clarity, the club has not yet announced any season ticket plans for 2021-22. Several thousand supporters have paid a small deposit in order to retain their seats and this will of course be taken into consideration.

STAR passed to the club the Football Supporters Association ‘charter’ on the ideal 2021-22 season ticket arrangements (in its view) and mentioned that the FSA will be looking to support a national ‘back to the stadium’ campaign, hopefully this autumn.

STAR thanked the club for its logistical and technical help in the online broadcast of the delayed 2020 Hall of Fame. The audience numbers were far in excess of what would have been achieved by a live event and was much praised. The autumn Fans Forum with the manager by Zoom also worked well. More consideration in future would be given to having STAR events both live in person and available remotely, requiring work in partnership with the club.

STAR itemised the work it had been doing with the club and others on preparations for the 150th anniversary season, for which it was thanked.

Together with the FPA and the Vice-presidents, STAR had organised the funding of a second Academy graduates board in the main entrance.