I joined the Club 1871 guys for the 4th time this season for the Leeds game having watched them light up the stadium on Saturday – it was not going to be like Saturday but I was pleased to see how many had returned after the Wigan game.

It fulfilled the mission statement: ‘To add another focus to improve the atmosphere and get fully behind the team, by using both old and new Reading chants to make home games feel like the best away games’.

I don’t know how it sounded to the rest of the ground but from within the chanting hardly stopped all game despite the opposition goals.  I assume the East stand was still chanting and we could hear the drum in the Eamonn Dolan stand so it was adding another focus;  the vast majority of chants were pro Reading and Reading players (or attempting to put off a Leeds player after a couple of bad misses)  so it was fully behind the team;  old favourite chants were heard and several that are new this season and finally with unreserved seating it really felt like a good away game.

The chants are growing constantly with new ones about our history – a certain Friday night in Southampton, the 106 team (Coppell is our gaffer) and playing the Reading way.  New chants are also appearing for players and a special one for the current gaffer which was deafening at Ipswich.

It may not be your idea of a good experience but there is no doubt that it is doing something to raise the atmosphere in a very challenging season.  The guys behind this initiative have spent time talking to Huddersfield and Crystal Palace supporters who have made the step up to a vibrant area in their grounds and although at Reading it has seemed slow to start it is no slower than at those clubs.

I am fully behind the guys putting their time into making banners and inventing new lyrics, but I like the view from my season ticket seat so will not join them permanently.  However it is a fun time even when you are losing so I will carry on being an occasional visitor. 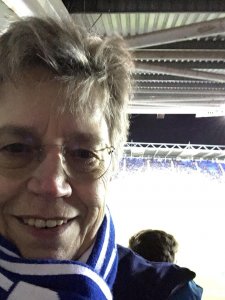