The Fan Led Review – what it means for Reading?

Home News The Fan Led Review – what it means for Reading? 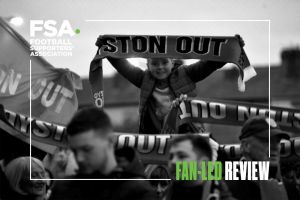 The Fan Led Review – what it means for Reading?

Supporters have been calling for a long time for a review into the way English football is governed. When the European Super League proposal was canned in April 2022 the Government immediately brought forward the Review to which it had committed itself in its manifesto.

STAR was among many supporter organisations that gave evidence to the Review in the summer of 2022 and when its recommendations were published on 25th November we welcomed them.

It looks as if this Review will become the most important document in English football since the post-Hillsborough Taylor Report (1990) which recommended all-seater stadiums.

Tracey Crouch MP, the Review’s author, insists that the recommendations are to be taken as a whole, but already some Premier League owners are looking to cherry-pick, that is ignore or oppose the parts they don’t like.

What happens next? There will be a debate in public about the Review ahead of the promised legislative programme which will begin next year in the House of Lords. So far, members of the House of Commons appear united in support of the Review. As supporters we can encourage our MPs by writing to encourage them to support the Review recommendations as they pass through Parliament.

Let’s start with two massive wins for the supporters’ movement. What has previously blocked any serious reform is the fact that ordinary businesses are essentially only responsible to their shareholders (i.e. in the main, their owners) so if the Cardiff City owner wants to change the club colours to red – well, he just did, for a few years. Or if the Wimbledon owner thinks moving to Milton Keynes is a good idea, well, he can.

The Review recommends two fundamental changes of principle that means clubs will no longer be treated just as ordinary businesses. Firstly, they will be given a status akin to listed buildings or other heritage assets – i.e. protected from unwanted cultural change. Secondly, they will have to operate under specialist business regulation, as do companies working in the financial sector. This will stop the financial madness that has afflicted the game for decades.

In order to make sure this works, the Review’s crucial recommendation is the creation of an Independent Regulator (IREF) – like an Ofcom or Ofgem. IREF will grant owners licences to operate professional football clubs – under certain conditions and to certain standards. The licensing system will apply to the Premier League, The EFL and National league Division One (116 clubs in all). IREF will be funded by a % levy on clubs’ TV income.

So, the governance of a club like Reading will be much more closely monitored and enforced – and not by the EFL and its inevitably vested interest) but by an independent and expert body. There will be ‘real-time’ financial monitoring that should nip crises like 2014, 2017 and 2020 in the bud and clubs will operate under a Code of Football Governance (based on the Code used by Sport England).

The so-called ‘Owners and Directors’ tests will be sharpened up and made consistent across the leagues. Separate, and more relevant, tests will be applied to owners and to directors (and also to any officials, executives and consultants of significance). And the Owners’ test will work a little like an MOT – you’ll have to re-apply every three years. These tests will apply to existing owners, as well as future owners. Given that Reading was criticised in the Review for being an “obvious example of poor governance … appear(ing) to lack proper board structures” it’s likely that IREF will take an early look at us.

As part of better governance and closer oversight each licensed club will be required to have 30% of its Board made up of independent Non-Executive Directors (NED) and to consult with a Shadow Board of supporter representatives – who will have access to all but the most confidential of information. Given that the Reading Board is only about five-strong and rarely meets, as far as we know, the NED requirement may be of less importance than the Shadow Board. It’s envisaged that the Supporters’ Trust (i.e. STAR in our case) will essentially form the Shadow Board and that principle has already been agreed at Bolton and Accrington Stanley. It’s likely to replace the Structured Dialogue meetings that STAR, along with only 11 other League club Trusts, already hold – and be more regular.

The cultural heritage of every licensed club – its name, home kit, badge, geographic location – will be protected by a Golden Share, held by a Community Benefit Society (i.e. STAR in our case). Any proposal by the club to change a ‘protected item’ would have to be done in consultation with the Golden Share holder and a democratic process involving registered supporters (not necessarily Trust members). Together these would constitute a barrier to unwelcome changes like Hull City’s idea to rename as Hull Tigers or Cardiff City swapping blue shirts for red shirts.

The Review proposes greater solidarity (or subsidy) payments coming from the Premier League to the rest of the football pyramid. It proposes a ‘Stamp Duty-like’ levy on incoming transfers from other PL clubs or players from abroad – thus making EFL players slightly more attractive in cost terms.

The Review has asked the PL and EFL to resolve the disputed issue of parachute payments urgently and, if they don’t, to accede to independent arbitration. The Review also advocates standard and compulsory clauses in player contracts to change players’ wages when their club is promoted to or relegated from the Premier League.

Two other proposals that won’t affect us yet! The Review recommends a pilot test in League Two / National League of allowing alcohol sales during the match and to be consumed at seats. It also asks that clubs promoted from the National League be given three years grace to replace an artificial pitch with a grass one. Sutton had to replace theirs at great cost over the summer.

We know from feedback around the supporters’ groups networks that conversations are already happening between trusts and clubs on the Review findings. STAR wrote to Dayong Pang, the Reading CEO, on 29 November, seeking a first meeting on this subject and we will certainly include it on the Agenda of our next Structured Dialogue meeting.

The mood amongst the supporters’ movement is very bullish – but also wary of the likely pushback from some PL clubs and their lawyers. The Leeds United CEO is on record as comparing the Fan Led Review to Mao’s Great Leap Forward which killed 15 million people! https://thefsa.org.uk/news/leeds-united-ceo-compares-fan-led-review-to-the-death-of-millions-yes-really/

The EFL however have accepted the case for IREF (the independent regulator) which is great news and show that, unusually, the FA, PL and EFL are not all stuck together behind a no-change agenda.

The Fan Led Review really is the big one. If it doesn’t happen – in terms of being accepted wholesale and passed into legislation – the clubs at our level really will be screwed over the next few years.

What can you do? Do email your MP and get your support for the Review on their radar. Do think about joining STAR and thus supporting the supporters’ movement. Do think about volunteering to help STAR – or even getting on the STAR Board. If and when all this happens, we are going to need more hands on deck.

This is the time, at last.

Please also see another take on the Fan Led Review with more detail on what’s in it by Ben Thomas on the Tilehurst End https://thetilehurstend.sbnation.com/