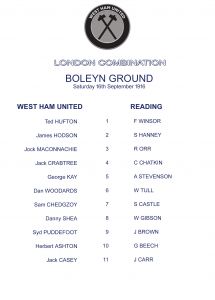 The club website reports the induction of Walter Tull into the National Football Museum’s Hall of Fame. https://www.readingfc.co.uk/news/2021/october/21/tull-inducted-to-hall-of-fame/

Walter was one of the earliest black professional footballers in England and made two away appearances for the Biscuitmen in September 1916 against Fulham and West Ham. These matches, in the war-time London Combination, were probably his last competitive games before returning to the Western Front where he was killed in action in 1918.

Stuart Allen, a West Ham historian and statistician, has provided us with a ‘re-created’ team sheet of the second of the matches, which West Ham won 5-1. The West Ham line-up contains a couple of well-known players of the time but in the Reading line-up there’s scarcely anyone who played a peacetime first team game for us. After a few more defeats we withdrew from this league in November 1916 and played no more competitive football for over two years.

One wonders how come Walter came to play for us, even if never in a home match. Well, for four seasons from 1911 he was a regular for Northampton Town who were very strong rivals of ours in the Southern League so he would have been well-known to our club. If he was living in London, available and willing to play for our weakened side then he would have been a great asset. RIP Walter.