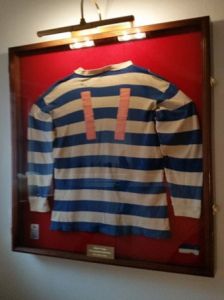 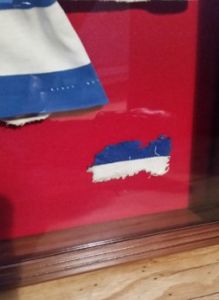 On the first day of the 1975-76 season 4th Division Reading faced Rochdale. We were hoping for promotion for the first time in 50 years. This game was memorable for the infamous Tommy Youlden ‘ghost goal’ allowed to stand after his shot rebounded from the stanchion outside the side netting. VAR anyone?

However, for me and my family of (long-suffering) Reading fans the match had extra-special significance. It was an ultimately straightforward home win and from my season ticket seat in ‘B’ stand I never noticed that the legendary Robin Friday was wearing the number 11 shirt instead of his usual number 9 shirt; Friday only wore 11 twice during the entire season.

My nan lived in Rutland Road, just around the corner from Elm Park, and worked at the club for many years as a cleaner and tea lady. She loved then current manager Charlie Hurley and always thought him a ‘true gentleman’. Nan also boarded club apprentices, triallists and new signings along with her close friend Eve who lived opposite. At that time Eve was boarding midfielder Bryan Carnaby and at some time in 1975, knowing that our family were huge Reading fans, Carnaby gave nan the number 11 shirt worn by Friday for that Rochdale opener. Apparently, Friday had kept the shirt after the game and used it as a training top.

About four years later nan gave it to her son Richard, my uncle, who kept it until 2009. He then gave it to my brother Nick after our mum, another huge Reading fan, passed away that same year. It hung in my brother’s bedroom for the next seven years.

By this time I had been living in the United States, but still following Reading as fanatically as ever and taking in one or two trips home for games at the Madstad. My 60th birthday was in 2016 and, at a family birthday gathering in a gorgeous converted barn in Somerset, Nick finally presented me with that number 11 shirt because, in his own words, he could not be bothered to buy me anything! Yet there was real satisfaction in his voice as he knew that I had coveted the shirt for decades.

Upon returning to the US, I had to give the shirt a fitting home. A boxed frame was perfect and in the frame along with the shirt is a fragment of another Friday-worn shirt. This I acquired at the post-game celebrations after we finally clinched a promotion at Cambridge in the penultimate game of that season. One fan had grabbed his 9 shirt after it was thrown into the crowd and, upon jumping aboard the Smiths coach to head back to Reading, he was ripping the shirt into shreds and selling the scraps for 50p each to his fellow passengers! So I have two Robin Friday shirts in one frame.

This piece of memorabilia is from Baz Greenaway

A gift truly worthy of the biggest lifelong fan of Reading that I have had the pleasure of knowing.
URZ!