My piece of Reading memorabilia – famous names in the visitors’ book 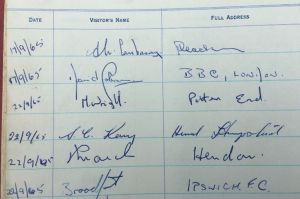 My father George Prout was one of the senior officers of the old Supporters’ Club at Elm Park. One of his duties was to sign guests into the Supporters’ Club bar in the Norfolk Road (north) stand. When the visitors’ book was full he kept it and passed it down to me.

On this page you’ll see signature of the famous BBC broadcaster David Coleman and Joe Broadfoot, the Ipswich winger.

This piece of memorabilia is from Tarquin Prout